Where You Will Find Us

Join us throughout Carefree & Cave Creek for these community happenings and activities!

This event has passed. 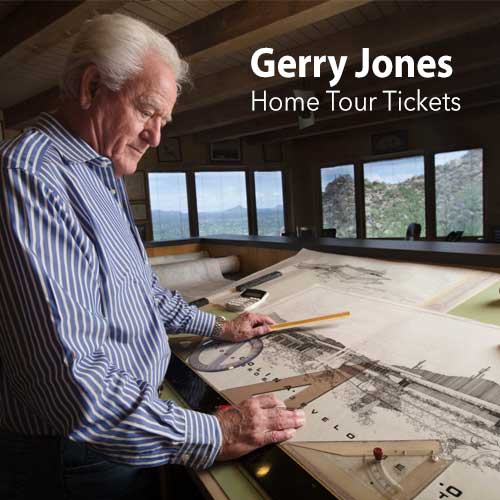 After serving in the Marines in World War II and Korea, Mr. Jones remained in China to study history and philosophy, and observed that ancient Buddhist monasteries were tucked directly into the mountains. When he began his career in design, he resolved to employ the terrain to its best advantage without destroying the natural mountain contours, just as the Buddhists had done centuries before.

A seasoned rock climber, Mr. Jones knew the land well. He laid out roads and lots by leading bulldozers across the land as he wove around native cacti, rocks, outcroppings, and trees. He utilized existing rocks and boulders structurally as supports for the foundations of his buildings and interior features of the spaces he created, bringing bedrock into dwelling spaces and placing homeowners into the living desert.

Tickets for the The Gerry Jones Home Tour on Sunday, March 8, 2020, are $75 each and are only available in advance through the Cave Creek Museum. Participants will visit the homes via chauffeured buses in three shifts throughout the day, 9am-noon; noon to 3pm; and 3pm to 6pm. Please note that the residences are multi-level and are not ADA accessible. For tickets and additional information, please visit cavecreekmuseum.org or call the Museum at 480-488-2764.